Importance of Some, Both, All, None in Venn Diagrams

These three keywords can help us draw Venn Diagrams very quickly - just ask a question, and watch for the answer you get. Let's see how.

If the two things have a relation of "some", then they have a common area. For example, if we say some doctors are athletes, then the sets of doctors and athletes have a common area. Some doctors are athletes or, vice versa, some athletes are doctors. Another example is some take tea only, and some coffee only, some take neither, and some take both. Here the presence of the word some should give us a hint that some common portion is there between the two sets.

The both keyword is also used to describe the common area to two sets of things.

Lastly, if the relationship is described by the "None" keyword, then the two sets have nothing in common. Such sets are called disjoint sets.

On the basis of the above let us discuss a question.

Discussion of a Question on Drawing a Venn Diagram

First of all there are two sets to be considered: fish eaters, and mutton eaters. Next notice that word "some" has been used to describe the relationship. We can blindly draw two intersecting circles. 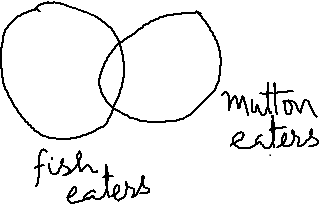 The next thing is to label the portions on the basis of the given statements. Some took only fish means the portion of fish eaters that is not common. Similarly, we can label the portion for mutton eaters also. Lastly, the rest accepted both fish and mutton means the common portion. We can now complete the diagram as shown below. 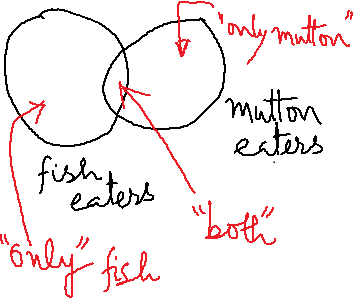 This Blog Post/Article "Importance of Some, Both, All and None in Venn Diagrams" by Parveen (Hoven) is licensed under a Creative Commons Attribution-NonCommercial-ShareAlike 4.0 International License.
Updated on 2020-02-07. Published on: 2016-06-05