What is a Datatype?

Each type of data item has a different nature. A datatype is used to describe that nature. Examples of datatypes are int, float, char, double, etc.,

Integer numbers can be stored in either of these types-

These different types are meant for storing integral numbers. Why are they so many? The answer is that they have different capacities. Some vessels are small, and some are large. A small cup can store water, but water can also be stored in a water tank. It's about the capacity. If I have to store a small numeric such as 20, then all of the above will be able to store it. But the best fit among them is "char" because it is of just the right capacity. There would be no wastage bytes. The storage would be used optimally.

Each of the types described above has an increasing memory size. They need an increasing allocation from the compiler, just like with vessels, as the capacity increases, the vessel size increases as well. A char occupies just one byte, a short occupies 2, and the other ones occupy even more bytes.

Floating point numbers can be stored in

A float can store numbers upto six decimal places, and the double is for the higher precision.

Single characters can be stored in a char type.

On the other hand, a character is just a single character that's written inside a single quotes.

The following code should clarify it all-

A number is never written inside double quotes. It becomes a string in that case and numeric calculations cannot be done.

The sizeof operator can be used to determine the memory allocated to a data type or a variable by your compiler.

Classroom training in C/C++ is available at our training institute. Click here for details. You can also register yourself here.

We have created a video tutorial that can be downloaded and watched offline on your windows based computer. It is in the form of an exe file. No installation is required, it runs by double clicking the file. Since the exe file is hosted on the Google Drive, it should be very safe because Google itself checks for any virus or malware. The video can be watched offline, no internet is required.

This single video will cost you USD $5. When you download the video, you will be able to watch the first few minutes for free, as a sample. The video app will prompt you for payment through PayPal and other payment options. If you want ALL VIDEOS, NOT JUST THIS ONE then go here: Complete Set of C/C++ Video Tutorials The entire set is priced at USD $50.

This is a screenshot of the software that should give you a good idea of the available functionality. Click on the image to see a larger view. 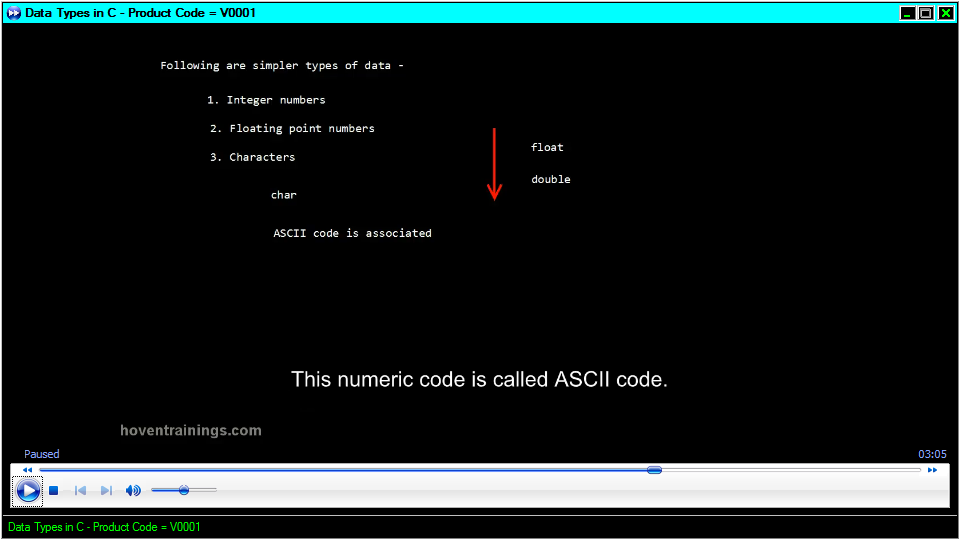 This software doesn't require any installation. Just download and double-click to run it. It doesn't require administrative priviliges to run. It runs in limited access mode, so should be very safe.

These videos can be run on 32-bit as well as 64-bit versions of the Microsoft Windows Operating Systems. Windows XP and all later OS are supported. If you want to run it on Windows XP and Windows Vista, then you must also have the .NET Framework Version 3.5 installed on your machines. Those users who have Windows 7 and later donot have to worry because these operating systems already have the .NET Framework installed on them.

IMPORTANT NOTE: This download contains ONLY ONE video. The video is about the topic of this tutorial.

Want ALL Videos? If you want ALL VIDEOS, NOT JUST THIS ONE then go here: Complete Set of C/C++ Video Tutorials. TIP: If you plan to buy these videos, then it would be more economical to buy the entire set.

DISCLAIMER: Even though every care has been taken in making this software bug-free, but still please take a proper backup of your PC data before you use it. We shall not be responsible for any damages or consequential damages arising out of the use of this software. Please use it solely at your own risk.

This Blog Post/Article "Data Types in C" by Parveen (Hoven) is licensed under a Creative Commons Attribution-NonCommercial-ShareAlike 4.0 International License.
Updated on 2020-02-07. Published on: 2015-10-05